It’s actually been almost twenty years since the first Rush Hour was released, but it seems as though Inspector Lee and Inspector Carter’s antics never get old. Here are fifteen behind-the-scenes facts you might not know about Rush Hour!

1/15. Chris Tucker was worried about the language barrier between him and Jackie Chan, and even asked the director, “How can we be funny if we can’t even talk to each other?”

2/15. Jackie admitted that Chris stressed him out because he improvised his lines during every single take. Because his English was still quite weak, dialogue was the most difficult part for Chan. “If I turned the page of the script and saw another dialogue scene, the whole night I wouldn’t be able to sleep”, said Chan. “I not only have to remember my lines, I have to remember Chris Tucker’s lines. But every time, it’s always different dialogue with him. He’s always making things up.”

3/15. Throughout the film series, it is apparent that Inspector Carter and Inspector Lee have amazing chemistry on screen. According to Chris Tucker, he and Jackie Chan were able to joke around with one another from the moment they met. “I could say anything to him and he could say anything to me”, Tucker said. “We were meant to work together.”

4/15. Director Brett Ratner flew to South Africa for one day to convince Jackie Chan to star in one of his films. They ultimately decided on Rush Hour, since Chan wanted to star in an action-based (rather than story-based) film. 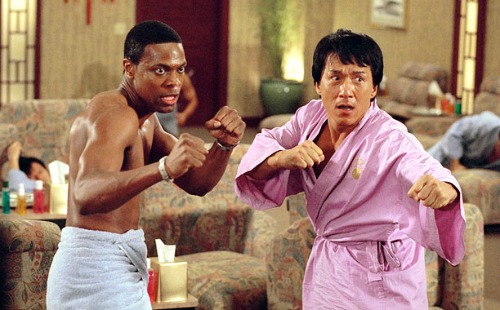 5/15. Jackie Chan was shocked at the precautions the crew had to take in order to ensure his safety. There is a scene where Chan jumps from a tree into a window of the Chinese Embassy. While stunt coordinator Terry Leonard admitted that Chan could have easily made the jump on his own, the crew had to build scaffolding on either side of the window in the event that the stunt went wrong. When Chan saw the scaffolding for the first time, he shook his head and said, “You Americans…so safe.” 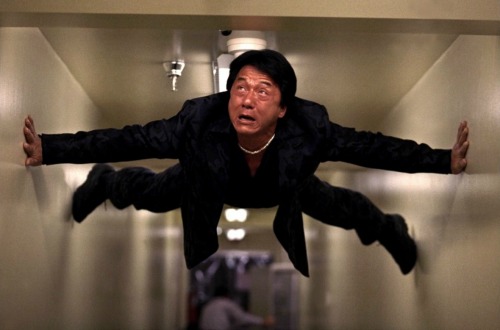 6/15. The mustache and afro on Inspector Carter’s badge were added as an afterthought in post-production of the film.

7/15. When Elizabeth Peña was trying on her bomb squad uniform, she thought it would be funny to come on set wearing nothing but her bomb squad vest. When she took off her robe and showed her bare behind to director Brett Ratner, his reaction wasn’t to laugh, but rather, to turn “ketchup-red” with embarrassment. 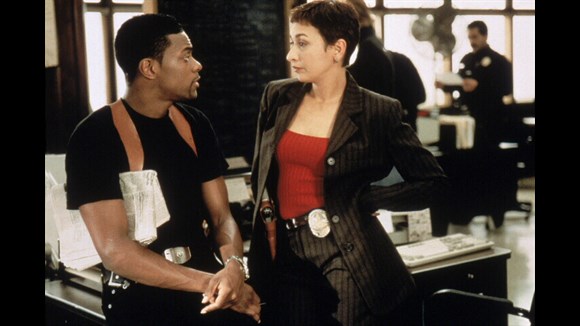 8/15. When the cast went to Hong Kong for the premiere of the first Rush Hour, Chris Tucker and Jackie Chan went to a karaoke bar with Chan’s friends. According to Chan, Tucker was singing and dancing to Michael Jackson for “four hours, non-stop!” This was the inspiration behind the scene in Rush Hour 2 when Carter sings Michael Jackson’s “Don’t Stop ‘Til You Get Enough” in the middle of a karaoke bar in Hong Kong.

9/15. During the filming of Rush Hour 3, the cast and crew of the film had the Eiffel Tower to themselves for an entire week. Tucker and Chan admitted to having fun with this privilege, like turning the lights of the tower on and off whenever they wanted – even at 5am in the morning. 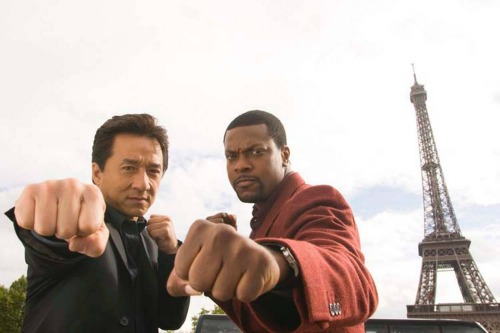 While said jokingly, this was a reality for the two co-stars. Allegedly, Chris Tucker and Jackie Chan sometimes required interpreters to understand one another.

11/15. Jackie Chan was the creator behind all of his stunts but was notoriously humble about his abilities. In an interview for Rush Hour 3, he said that his stunts are not on the same level as Batman or Spiderman, but things that are “a little bit beyond” the capabilities of “a normal person”. 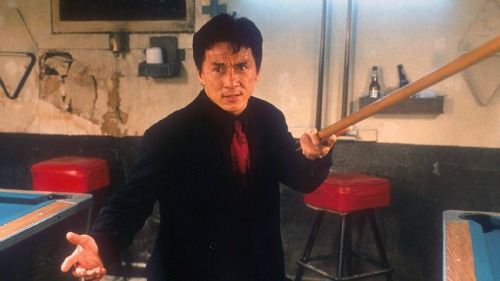 12/15. According to Jackie Chan, Chris Tucker was a huge help when it came to learning the script – and even helped Jackie improve his English. Tucker would tell Jackie how to deliver his lines, and let him know when he was saying an English word or phrase correctly.

13/15. According to director Brett Ratner, Rush Hour is the first American film featuring Jackie Chan in an English-speaking role without any dubbing. Ratner was adamant about Jackie Chan speaking for himself, since he thought it would make the character of Inspector Lee more authentic.

14/15. Chris Tucker didn’t want to embarrass Jackie Chan when it came to doing stunts. Before filming began, Tucker worked out profusely in order to measure up to his co-star. “I’ll follow his lead and he’ll make me look like a big action star,” Tucker said of Chan.

15/15. Director Brett Ratner was big fan of Jackie Chan’s Hong Kong movies, and really wanted to incorporate some of the actor’s gags from his older movies into Rush Hour. The scene in which Inspector Lee accidentally grabs Tania Johnson’s breasts is a reference to Jackie Chan’s 1997 film, Mr. Nice Guy.

Share these amazing facts with your Rush Hour loving friends too!