Shawn Wiebe is a courageous fire fighter that was helping out during dangerous floods in Alberta, Canada. Shawn did everything within his power to save as many lives as possible. People were stuck in their homes as the cold water continued to rise, they were stuck in their cars, and the situation quickly got a lot worse than anyone initially expected.

But when he came across an older woman in need of help, instead of leading her through the water, Shawn realized it would be a lot more efficient just to pick up the stranded grandmother and carry her to higher ground. 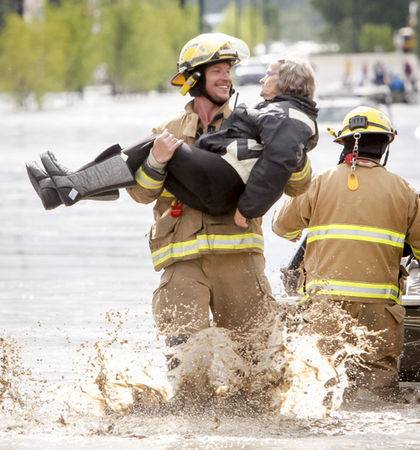 While Shawn was carrying her to safety, she suddenly let out a laugh along with the hilarious sentence, “Oh! I haven’t been carried like this since my wedding night!”

Shawn suddenly burst into laughter. After such a tough day, it must have been incredibly nice just to laugh for a moment!

Watch the recap of the event in the short video below: